Bhopal is the capital city of the Indian state of Madhya Pradesh and the administrative headquarters of Bhopal district and Bhopal division. Bhopal is known as the City of Lakes for its various natural as well as artificial lakes and is also one of the greenest cities in India.

The major industries in the old city are electrical goods, medicinal, cotton, chemicals and jewelry. Other industries include cotton and flour milling, cloth weaving and painting, as well as making matches, sealing wax, and sporting equipment.

Agri sector (including Animal husbandry) forms 20.53% of GSDP in MP – About 73% population depending largely on Agriculture – More than 15 million ha. of area under cultivation. Madhya Pradesh is ranked no 1 in the production of oilseeds, pulses, aromatic and medicinal horticulture, no 1 in production of sesame and pea and ranked no 3 in production of citrus fruits and cereals and also among top 5 states in milk production. The state has 11 agro-climatic zones and 5 Crop zones with varying land use, soil types, rainfall and water resources distributed across 51 districts of the State. 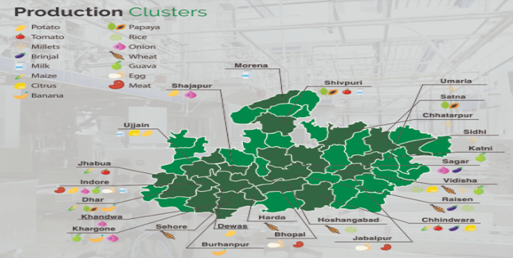 Food Parks – 6 food parks being established in MP at:-

Apart from these food parks there are 5 agri-export Zones, and 45 Industrial Areas in Madhya Pradesh.

To encourage the agri production and industrial establishments in Odisha the government is now planning some excellent policies especially for the food processing industries, such as-

Indore being the capital city is growing along with the state Madhya Pradesh with a steady rate. The growth is now inviting billion dollar multinational companies like Pepsico, Britannia, ITC, HUL etc for business which surely is contributing to the economic growth of the state.